Virat Kohli is the cover star of issue 5 of Wisden Cricket Monthly, as Suresh Menon, editor of Wisden India, analyses his development into the finest cross-format batsman in the world and looks at the impact he has had on Indian society and the legacy that his team are creating.

Ahead of England’s Test series in New Zealand, we also have a candid interview with Dawid Malan, who tells us he doubted whether he belonged at the top level before his breakthrough Ashes, and take you back to the infamous ‘Sex, Drugs and Rock ’n’ Roll tour’ of 1984, speaking to several players who were involved to separate fact from fiction.

Elsewhere, Paul Collingwood lets loose on the “devastating” situation at Durham, Dale Steyn recalls hospitalising himself as a kid after replicating Jonty Rhodes’ famous run out in the garden and columnist Kumar Sangakkara picks out Wasim Akram as his third ‘Titan of Cricket’.

And for all you club and junior cricketers, we have a selection of the best gear on the market for 2018 in our 12-page equipment showcase. 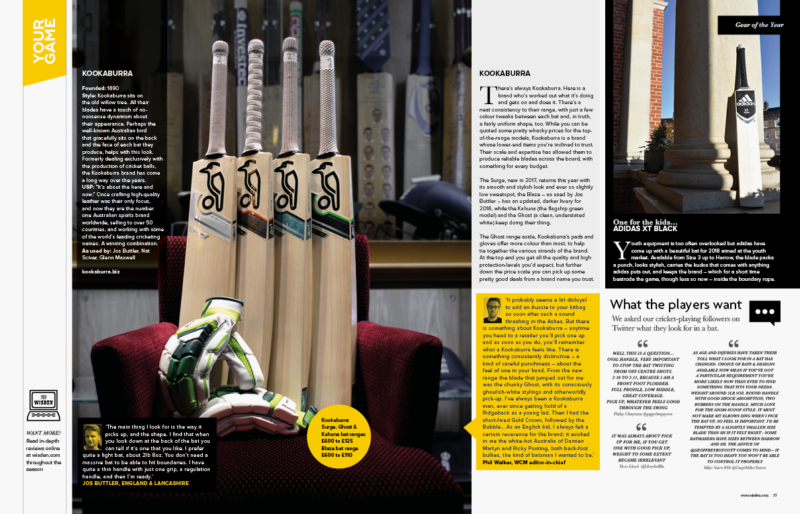 Showcasing the best gear of 2018

10 standout quotes from the new issue:

“Just as cricket often stands for something beyond itself, Indian captains are more than their job descriptions. Ganguly said it was the second most important job in the country. Sometimes Kohli makes it look more significant than that.”
Suresh Menon on Virat Kohli and the influence he wields in Indian cricket and society in general 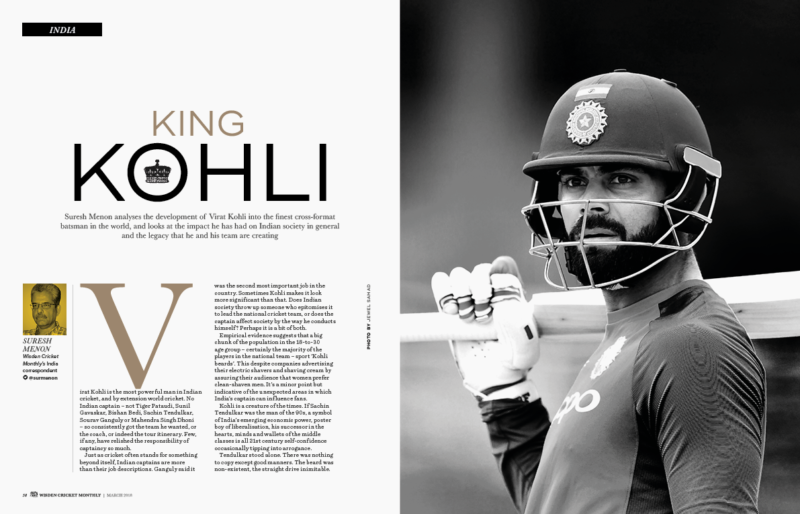 “I saw Jonty Rhodes in 1992 run and dive and take all three stumps out of the ground [to run out Pakistan’s Inzamam-ul-Haq during a World Cup match at The Gabba] and I would repeat everything that he was doing out in our backyard. So I would put my three stumps in the ground and I would run and dive and knock them out. I did it so many times that my parents had to take me to hospital to be examined because I had so much bruising across my chest.”
Dale Steyn on his life spent in cricket

“When I got picked I thought, ‘I don’t think I should be playing Test cricket’. If it had been a one-day or Twenty20 match I’d have walked straight in and done my thing. But there was this little bit of self-doubt that I didn’t really belong in Test cricket.”
Dawid Malan on proving to the selectors and himself that he is a Test-quality batsman 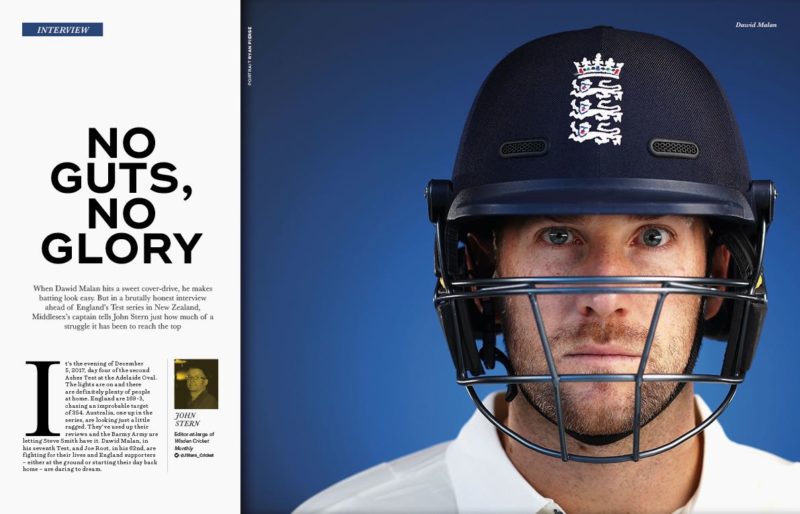 “This is my 23rd season at Durham and I’ve never found an obvious reason to leave the place. In my eyes you get as equal an opportunity here as any other county to play for England. I can half-understand batsmen saying wickets aren’t as good as you might get at The Oval but a bowler like [Paul] Coughlin wanting to leave Durham is something I can’t get my head around. I’d like to have seen players say they wanted to help get the club out of the second division. Loyalty is not a word that can be used much these days.”
Paul Collingwood on the talent drain from Durham

“His bat that day seemed to possess a sensibility, as if it was part of his nervous system; that he had a current running through his body and down through his fingers into the blade. If you ever felt that you could play a little, Martin would burst your bladders of vanity.”
Jeremy Coney on standing at the other end watching Martin Crowe’s first Test century, as part of our feature on England’s 1984 tour of New Zealand 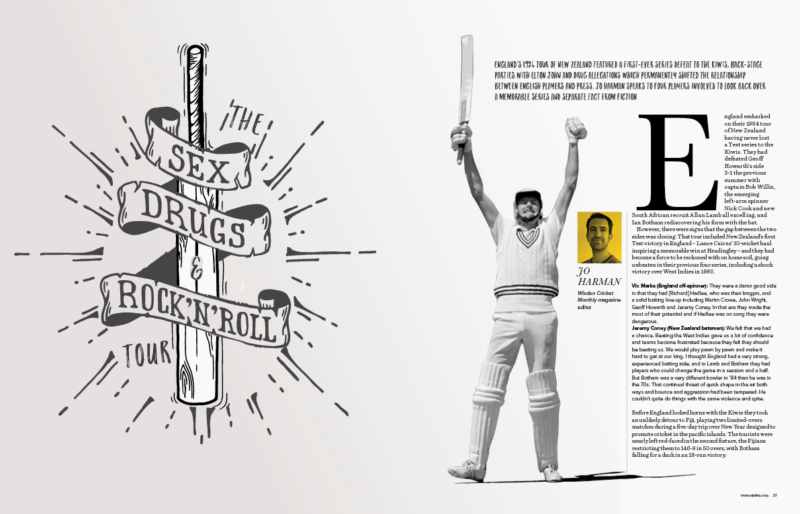 “The T20 Blast will be shoved out of the prime summer-holiday period, slashed by four games per team, shorn of publicity, and essentially be reduced to a sort of feeder league to the new tournament. It takes a certain creativity to kneecap your own most successful competition and call it progress.”
Jonathan Liew argues the new T20 competition will widen the gulf between the wealthiest and the rest in county cricket

“Wasim inspired a huge following of fast bowlers, not just in Pakistan but across the world, in Sri Lanka – the likes of Chaminda Vaas – and even in India, who have looked at this magician and thought ‘I want to bowl like him’. Suddenly you had this whole batch of left-arm fast bowlers playing in the subcontinent, and it was glorious to watch.”
Kumar Sangakkara selects Wasim Akram as his next ‘Titan of Cricket’

“Is it really so pie-in-the-sky to imagine a landscape in which England’s most talented cricketers have time to play a moderate amount of first-class cricket and make a case for Test inclusion?”
Alex Bowden on the fallout from Adil Rashid and Alex Hales deciding to focus exclusively on white-ball cricket 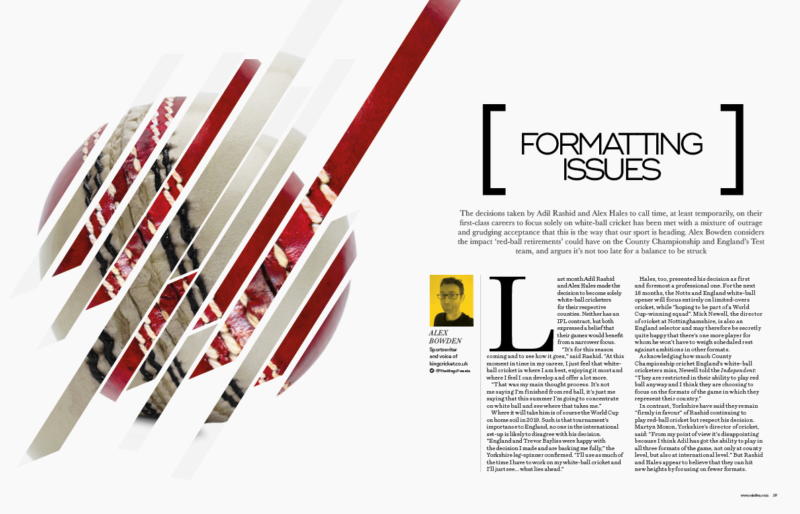 “At the start of last summer I decided I wanted to be the best death bowler in the world. That was my aim, for Surrey and then hopefully for England. It’s not an easy job and it’s something that requires a lot of practice. You’ve got to want to do it.”
Tom Curran shares his tips on closing out an innings in our coaching section

“I often get asked when commentating on Test or one-day cricket to tone it down, and that’s totally understandable. It’s going through the gears: you’ll be down at one or two for Test cricket, whereas in IPL I tend to be around four or five.”
Danny Morrison on his unique commentary style 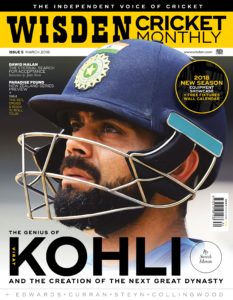