Paul Collingwood says he is disappointed so many established players have left Durham rather than helping the club return to the top tier of the County Championship.

Ahead of his 23rd season at Durham, club captain Paul Collingwood has spoken of his frustration at witnessing so many players leave the county, claiming that loyalty is a rare commodity in the modern game.

Only six of the 18 players who appeared in Durham’s Championship triumph in 2013 remain at Chester-le-Street, with several homegrown stars opting to leave following the county’s demotion to Division Two ahead of the last campaign.

The talent drain started with Scott Borthwick and Mark Stoneman leaving for Surrey in the winter of 2016 and continued at the end of last summer with 50-over captain Keaton Jennings and veteran seamer Graham Onions heading to Lancashire, while T20 skipper and England Lions all-rounder Paul Coughlin, 25, has moved to Nottinghamshire. 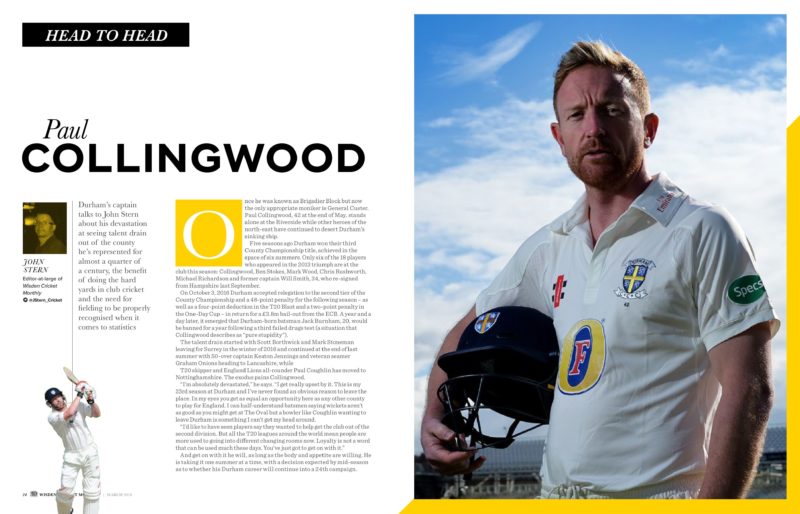 Collingwood speaks out in the latest Wisden Cricket Monthly

“I’m absolutely devastated,” Collingwood tells John Stern in the March issue of Wisden Cricket Monthly. “I get really upset by it. This is my 23rd season at Durham and I’ve never found an obvious reason to leave the place.

“In my eyes you get as equal an opportunity here as any other county to play for England. I can half-understand batsmen saying wickets aren’t as good as you might get at The Oval but a bowler like Coughlin wanting to leave Durham is something I can’t get my head around.

“I’d like to have seen players say they wanted to help get the club out of the second division. But all the T20 leagues around the world mean people are more used to going into different changing rooms now. Loyalty is not a word that can be used much these days. You’ve just got to get on with it.”

Having been penalised with relegation and a 48-point penalty in the Championship last season – as well as a four-point deduction in the T20 Blast and a two-point penalty in the One-Day Cup – in return for a £3.8m bail-out from the ECB, Durham will at least start the 2018 campaign on a level playing-field. But Collingwood concedes that the club now have to build for the future rather than expecting an instant return to county cricket’s top table.

“You never go into the season without the ambition to win trophies,” says the 41-year-old, “but we have to be realistic. We have lost five experienced players over the last two years – guys we have built up to playing international cricket. That probably took four years so we’re going to have to wait until the next generation come through now.

“We have some good youngsters who have shown potential but with young guys you don’t get the consistency. You never know with Durham – if we can build that spirit early on and get things moving then anything can happen. But realistically we’re building a team for four or five years down the line.” 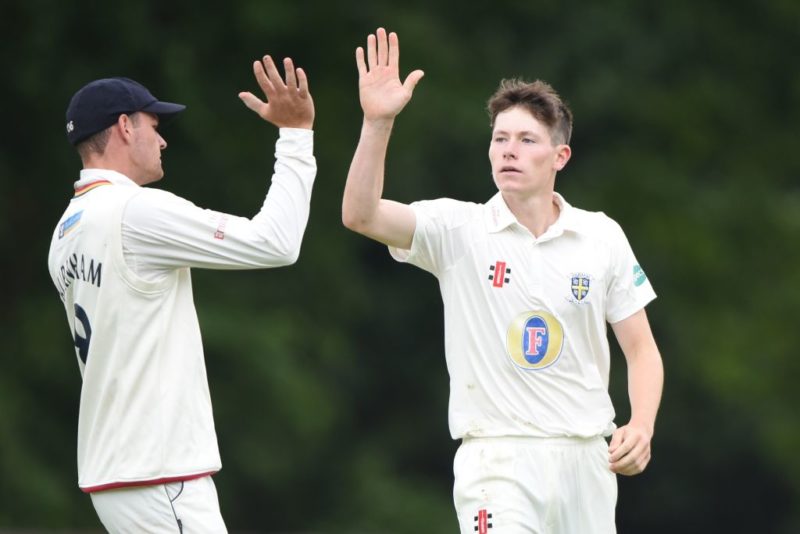 That means relying on the conveyor belt of talent that has produced numerous England cricketers in recent times to keep coming up with the goods, and Collingwood identified Matty Potts, a 19-year-old paceman, as a player worth keeping an eye on.

“He impressed straightaway,” said Collingwood of Potts, who took 14 Championship wickets in five matches last season. “He looks the real deal and is very exciting.”

Durham begin their Championship season with a home fixture against Kent on April 20.

To read the Paul Collingwood interview in full, you can buy your copy of Wisden Cricket Monthly here