Simon Jones – one quarter of England’s historic Ashes-winning seam attack – reflects on the ups and downs of his career.

Matt Maynard came down to Millfield School to sign me. I joined the school after I’d played against them for Wales. I got a six-for and belted a few boundaries – after that they offered me a scholarship! Essex were interested in signing me after that and Keith Fletcher and John Lever came down to have a chat, but Glamorgan got wind of it so Matty came along to see me bowl in the nets and signed me up.

Matty came up to me and said: “Horse, you’re playing.” The big thing for me were the words of David Boon. I bowled at him and as we came off one day he said: “Mate, you’ve got some serious talent there, keep working hard and you’ll go places.” For someone like him to say something like that – it really pumped my tires up. 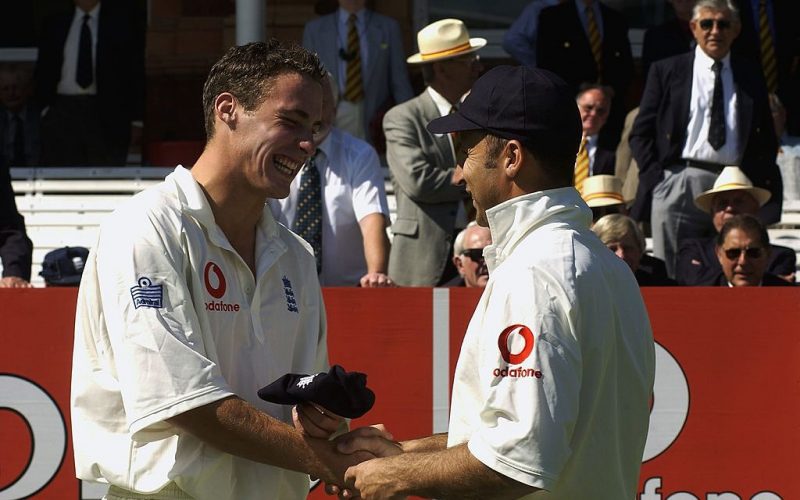 I was full of confidence and there was talk that I was going to get a gig for England but you never quite believe it until it actually happens. As a kid you dream of it and I was 21 or 22 at the time – to get my call-up was an immense feeling. I actually nicked Sachin off for my first wicket but Graham Thorpe dropped him – I was absolutely gutted. It would have been nice to get the world’s best player as my first scalp! It ended up being the keeper [Ajay] Ratra, which was an amazing feeling, but it would have been even better if it was Tendulkar!

I’ve only ever watched it once. I can’t look at it really. I’d just broken into the England team, I’ve always given everything 100 per cent, and all I did was just chase the ball in the outfield as fast as I could and I was out of the game for 18 months. To get my first wicket out in Australia was a great feeling and then to have to go home was very disappointing. At the same time, I like to think everything happens for a reason and the time out of the game allowed me to become a better bowler.

To get back into that side – with Hoggy, Harmy, Fred and Gilo – was such a great feeling because people had written me off. It was an awkward time, actually, because I didn’t have a central contract and if my career had ended I would have had very little pay-out so the pressure was on to get back. Something I’ve always thrived on is people doubting me because I’ve always loved being able to look them in the eye when I’ve proven them wrong. That team was young, hungry and incredibly talented: we thrashed them. I get goosebumps just thinking about it, to have a squad of bowlers like we did was a comfort. Each of us put our hands up at different times. The confidence that we had was second to none, we feared no one and, at times, we were unplayable. 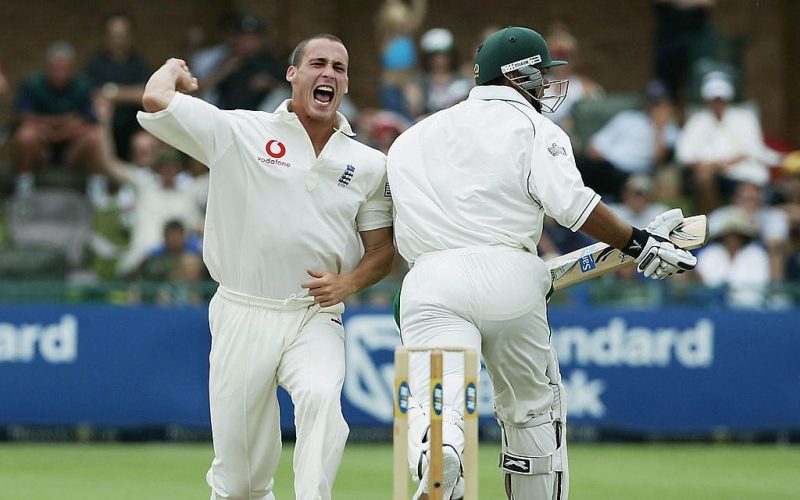 South Africa was a mixed tour for me. I got wickets in Port Elizabeth and I played in every game bar one but I think it was a time when Vaughany didn’t quite trust me with the new ball. He had his beliefs and I felt as if I’d been labelled as an old-ball bowler, which disappointed me because I could bowl with the new ball as well. I remember once going two-and-a-half sessions without bowling a ball and I’m there on the boundary wondering why I wasn’t bowling and whether the skipper believed in me or not. I think, in the end, I won his respect with the way I bowled, so it was a learning experience.

I’d previously asked Hayden how long it had taken to pump up his chest that morning and he’d looked at me in a way which suggested I shouldn’t have been speaking to him like that. I just thought ‘Bring it on, sunshine.’ We weren’t going to be inferior, we weren’t going to be bullied. He was one of our targets, we wanted to keep him quiet. The ball came back to me and I thought I would let one flash past him. Unfortunately, my thumb got stuck and it hit him in the shoulder. It didn’t hit him that hard, he made it look like he’d been shot! He came charging down the wicket so I apologised – he wasn’t having any of it – Straussy came in and said a few words in his very posh accent and then Colly came in and I don’t think he understood a word he said. Then Fred came over and, funnily enough, Hayden turned around! I think it just showed the belief we had in each other – we were willing to back each other in a scrap.

I was bowling during the second innings of the Test at Lord’s and I heard a massive crack in my ankle. It was the bone spur I had in my ankle – as soon as I heard that crack the pain set in. That’s why I looked a bit tentative in a few spells, which was tough because in the first innings at Lord’s I had felt so good. I fought on with it but it got the better of me in the second innings at Trent Bridge. I woke up in the morning and had to call the physio to tell him that I literally couldn’t walk. The pain was remarkable, it was like nothing I had ever felt before. I had a jab in my ankle so that I could bowl but it was like that feeling when your leg goes to sleep – I couldn’t feel my foot at all, I didn’t even know when I was landing. It was a tough one to take because the series had gone well. To miss out like that was a real average feeling. I’d taken 18 wickets in three-and-a-half Tests and I’d have loved to have taken more. After that I felt helpless. For me, it just wasn’t meant to be, but it was an incredible summer.

An incredible day. We hadn’t had much success for a long time and even though we didn’t win on the day it was special to be involved in that changing room. It’s changed a heck of a lot since I started and obviously I was a senior player. I’d announced my semi-retirement at that point which I think had been construed as a full retirement because the way the crowd clapped me off was an amazing feeling – it made the hair stand up on the back of my neck. I did choke up a little bit. It was an outstanding feeling, especially knowing my dad was there, my mum and my little boy. It was such an appreciative crowd and, it being at Lord’s, you couldn’t ask for a better send-off really.

“That is VERY good!”

This was such a memorable match. It was nice to play on a wicket with some pace in it and it was phenomenal to get a six-for in the first innings. With the attack that we had, considering we were using the Dukes ball, everything was in our favour. I remember standing at the top of my mark, just before I bowled that ball to Michael Clarke, and the crowd had gone a little bit quiet so I gave them a gee-up. I had been bowling out-swingers to him, so I thought I’d bring one back in to see what happened. He shouldered arms and obviously his off-pole just went. I lost my head a bit with the celebrations, mind, I was so pumped up! People remind me about this delivery all the time – it wasn’t the best delivery I bowled all summer but obviously it’s special because it did him all ends up. I still remember it all so clearly now.